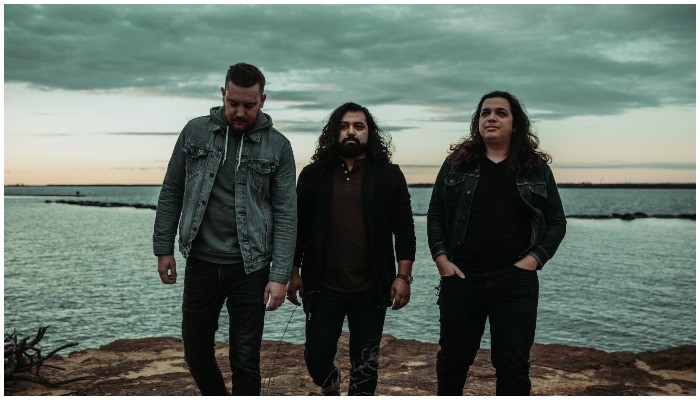 The album represents the chaotic moments of life when the future becomes unclear. To the band, that part of their life came about when they finished school. They then had to figure out what they wanted to do with the rest of their lives.

Read more: 15 bands and solo artists who are rewriting the emo rulebook

Especially when it seems like the rest of the world is moving on normally for everyone but you, being uncertain about the future can be an intense feeling. This concept is also what led the trio to change their band name from Corusco to Lost At Sea, a metaphor for the very feeling of unpredictability.

Three songs from Motion Sickness have already been released, “On My Own,” “Collider” and, most recently, “The Albatross.”

For the theme of “The Albatross,” the trio looked to a book called The Raw Shark Texts by Steven Hall. They were inspired by the sci-fi book’s depiction of a shark feeding on memories. For this reason, the song centers on a character suffering from survivor’s guilt. It’s so intense that he ends up losing all of his most important memories.

The video for the track candidly explores the theme as a man searches around an empty house. He looks at picture books, Polaroids and flowers, trying desperately to remember something he forgot. The gloomy visuals and the hopeful tone of the ending only further add to the song’s atmosphere of uncertainty.

Read more: 10 modern sad songs that will fit right in on your emo playlists

The band joined forces with the Early November’s Ace Enders and Man Overboard’s Nik Bruzzese to produce the album.

“Ace and Nik pushed us to grow in so many ways,” vocalist/guitarist Aaron Gonzalez says. “Before tracking anything, we broke down every song to its basic elements, found the heart of each song and built them back up as strong as they could be. We even ended up writing a good portion of the songs in the studio.”

You can listen to the album and exclusively read about the band’s creative process for it below.

What was the inspiration for Motion Sickness, and what was the story you wanted to tell with it?

Motion Sickness is a collection of stories that reflect the struggle of pushing through something heavy while being thrown back and forth. Whether it’s love, loss or a relationship that seems impossible to work through, this record is about fighting through that. We were in the midst of moving to Dallas from the college town where we cut our teeth. We were also struggling with a lot of changes in our personal lives, and it feels like it spilled out both intentionally and unintentionally.

Walk us through the creative process, from your initial conceptualization to the final product.

We don’t necessarily write an album with a concept in mind. Usually, we take a step back when most of it is written to see if there are any patterns. We had been touring a lot in the year leading up to recording, so by the time we got into the studio in August 2019, we’d had a bunch of ideas marinating in the background. As the ideas came together in the studio and we looked at the songs with fresh eyes, it felt like we had captured a moment in time for us as people and as musicians.

As far as individual songs, there were a lot of stories and concepts that I wanted to humanize and retell. Some reflecting on my own life and some wondering what it would feel like to stand in someone else’s shoes. There’s even one track that’s a nod to The Allegory Of The Cave from Greek philosophy. Almost all of the songs feel like they’re working through some kind of conflict or have a desperate yearning for someone or something just out of reach.

What’s the most important thing you hope fans take away when listening to the album?

We wrote and recorded this album before any of the craziness in the last year or so happened. Yet, somehow a lot of the songs still feel relevant and even more urgent now. I hope that when people listen, they feel not only what we felt while writing them but also feel like they’re able to find that thing just out of reach. Whether that’s love, healing, understanding or simply hope.

For the production of the album, you teamed up with Ace Enders and Nik Bruzzese. What was the collaboration process like working with them?

Working with Ace and Nik at The LumberYard was an incredible growing experience. They pushed us in so many ways, as songwriters, musicians and helped us grow into our new sound. A little peek behind the curtains: I was stress-eating sunflower seeds while furiously writing lyrics between sessions, and we would regularly take midnight walks to the Wawa across the street to grab sandwiches.

Jokes aside, we had a great time, and the process had a lot to do with digging into each song, tearing it apart and building it back up stronger. We tracked 10 songs in 12 days in a wood-walled cave inside of an old antique shop in Hammonton, New Jersey. It was such a cool experience.

Looking forward, what should fans expect from Lost At Sea after this album?

Ideally, we’d love to be on the road as soon as possible, as often as possible, whenever touring is safe again. In between now and then, we’ll just be writing and working on connecting with y’all on social media. We love hearing from our fans. It really means a lot, especially after this last year.

The post Lost At Sea explore the uncertainty of life in ‘Motion Sickness’—listen appeared first on Alternative Press.

Game of Hacks – See How Good You Are

49 Rock + Metal Artists Pose With Their Pets for National...

10 TV shows you should watch while waiting for ‘You’ to...

The first hotel in the space will open in 2027

Building an API in 60 seconds, without any server setup

Electric Daisy Carnival to Take Place in May Despite Continued Covid-19...