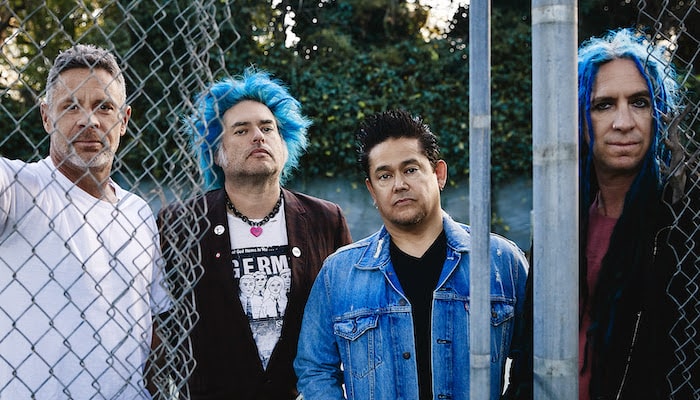 It’s hard to believe that SoCal punk-rock legends NOFX have been around for nearly 40 years, but the band are still proving naysayers wrong song after song with their enduring and tenacious success. To showcase such, the band are releasing their 14th full-length Feb. 26 via Fat Wreck Chords. The aforementioned record is called Single Album, and it was produced by longtime collaborators Bill Stevenson and Jason Livermore (Rise Against, Alkaline Trio, Teenage Bottlerocket) at Motor Studios in San Francisco.

In tried-and-true NOFX form, the record’s unique tongue-in-cheek title nods to the fact that the band had originally planned for the release to be a double album, but they instead scrapped a number of compositions and created an all killer, no filler 10-song modern classic. Fans clamoring for more material shortly after this record is released, rest assured. Since frontman/bassist/songwriter Fat Mike’s rehab stint in fall 2020, he wrote an entirely new record and has been sober since. And there are still approximately 13 songs you’ve yet to hear from the Single Album sessions that didn’t make the release.

Read more: Watch and learn how Descendents make the perfect cup of coffee

You entered rehab in fall 2020 after Single Album’s completion and already wrote another album since. Congratulations on becoming sober. Was this entire record recorded under the influence?

Oh yeah. I was doing a lot of drugs for this album. This album was finished about a year ago, though. It’s pretty weird. I had 23 songs recorded. And the first 16 were recorded with Jason [Livermore] and Bill Stevenson. And we ran out of time because I kept adding songs. Like, “What are you doing, dude?” I go, “Uh, I have all these songs.” And then I decided to make a double album. And so, I had a studio at my house, and I just kept recording shit. And I finished about 23 songs, and then Frank Turner called me and said, “Hey Mike, I got my songs recorded.” And we hadn’t talked in about six months, and I came up with the idea of doing a split album with him. And I said, “Yeah, have everything done by like February.” And he did! And I didn’t start at all. I didn’t even tell my band since we were on tour in the summer. So, I knew Frank was gonna do it, but I didn’t think he would do it on time. I thought he might call me and say we started recording. Or he was recording next month. And he was finished, and so everyone at Fat thought it would be a cool release to do [as] a split record because it was during COVID and everyone’s just bummed out. Let’s put out a happy record.

Yes, because this one’s not a happy one…

No. It’s such a weird feeling to have finished a record and having to wait 10 months or so to put it out. Or a year. It’s hard to wait three or four months, but a year is fucking really weird. I made a double album, and I played it for some people, and everyone’s like, “Cool. This is great.” I had the feeling that it wasn’t. Doing a double album is very ambitious. It puts you in a different mindset ’cause you’re trying to make something that’s interesting for that long. And I don’t think anyone’s ever made a good double album except for Pink Floyd’s The Wall.

Let’s dig right into “Birmingham.” Was that the song that made you realize you were an addict and that you were going through something really rough?

No. I just like that song because “Birmingham” was a problem for me. Someone gave me the number of a drug dealer that drove to your place, and I’m alone. And that’s when I realized I can’t be alone and do drugs. I always had a system for that at home. I’m sober now, but when I did drugs, I did not have access to my drugs. I wasn’t allowed it. And I always have someone around me that held my drugs in a safe in a different location.

We’ve all been human safes for other people before.

But it works! “Hey, I’m gonna go out tonight and party.” And I’m given a small amount of drugs that are already tested, and I know what I’m getting and not very much. And it’s funny [because] when I went to rehab, both therapists and a doctor said, “Oh, you’re not an addict. You’re not an alcoholic, and you’re not an addict.” My liver is great. I’m very healthy ’cause I exercise so much. And they said, “You have problems, and you deal with your problems through drugs and alcohol.”

It takes a lot of strength to do that. I know that it was originally supposed to be a double album, but as a 10-track full-length, this sounds like one of your most experimental full-lengths in your 14-album catalog. Was that by design?

No, side two was faster, funnier—not punker, but more straightforward—and there are a lot of great songs I dropped, but I think these songs all fit together. I think it’s a very cohesive album. It’s dark, but “Fuck Euphemism” isn’t dark. “Linewleum” isn’t dark. The cancer song isn’t dark.

Should we expect the other 13 songs as singles or a separate B-side album release in the vein of 45 Or 46 Songs That Weren’t Good Enough To Go On Our Other Records?

I’m not sure exactly, but what I’m doing right now is… I’ve written over 30 new songs ’cause when I was at sober camp, I wrote a lot.

Did they let you bring a guitar there?

Oh yeah. I give it to my ex-wife, Erin [Burkett], ’cause she is the one who suggested I go to rehab. And it wasn’t even because of my drug problems. I was going on a three-week sober vacation through my friend’s motor home to the Grand Canyon. And I got H. pylori, this bacteria in my stomach. It’s chlamydia of the stomach. I puked up a bunch of blood and was shitting blood, and I thought I was dying. It was crazy. But I was sober at the time. But everybody’s like, “See, that’s your body telling you you’re using too much.” I found out at rehab that it wasn’t the drugs or drinking—it was this fucking bacteria. But the month I was there was awesome. So, I just wrote so much that I’m not interested in the 13 songs that didn’t get put out. Those will make it out at some time. I’m interested in the new songs that I am writing. I’m just stoked. They’re better songs.

The record opens with the nearly six-minute “The Big Drag,” one of the longer songs in your catalog, and the tune truly kicks in around three minutes. Was that one of the first songs written for the album?

I don’t remember what I wrote first, but there’s a demo version of that, which is really cool. I love that song. I don’t get sick of it because there’s no pattern in it.

It’s hard to dance to! “The Big Drag” certainly challenges the listener.

It’s based on a Rudimentary Peni song. They have a song called “Rotten To The Core.” They talk shit about Joe Strummer, pretty awesome. They’re a band that only played nine shows, and they’re NOFX’s favorite band, I would say. And a huge influence. We used to cover their songs all the time. Very strange band. Lyrically crazy. They were better musicians than almost anyone else. They were on Crass Records. Somehow, that band got to prison, not [the] members, but the music. A lot of punk rockers went to prison. And the white pride prison gang is called Rudimentary Peni. Felons have Peni tattoos on their neck.

“Fish In A Gun Barrel” features a reggae vibe and discusses a mass shooting. The harmonies and sax during the bridge are especially beautiful and heartbreaking. The song was released in 2019. Was it a part of the same session for this record? I’d love to hear what inspired this powerful tune.

Having a home studio, Motor Studios, I just go in and record songs. It’s super fun. And then after they’ve been around for a while, then I get serious. ’Cause I like to listen to a song for a few months before I put down the actual recording. This recording is different than the single version. There’s keyboard added, and there are some other things added. The keyboard adds so much.

Yes, it does, especially during the bridge. That was really powerful. It’s so sad.

Thank you. And that song, I think it’s really special. Noted in the album, it was written seven months before the Vegas shooting. And I couldn’t release it then because it would sound like I’m exploiting what happened.

Heartbreak closes the record with a piano on “Your Last Resort” until the band come in for one of the fastest musical parts of the entire album. What’s this song about?

That song is about me and Soma Snakeoil. We were together for eight years. We were married for a short time. The first part of the song is from her perspective, the piano part. She’s singing to me there. And then the rest of it [is] me singing about our relationship.

Iced Earth’s Jon Schaffer is now in the custody of the...

Too Old To Be Great? Tell That To Tom Brady.

Why Are Cats on TikTok Getting Really Into Mid-2000s Ambient Music?

Struts Recruit Strokes Guitarist for 'Another Hit of Showmanship'

Joe Goldberg is back in a new look at Netflix’s ‘You’...