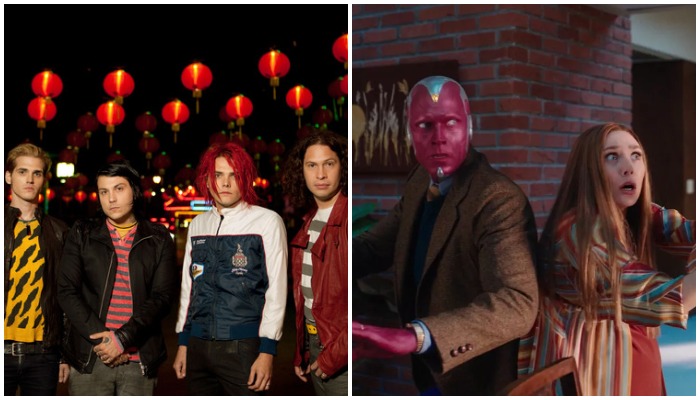 A new crossover in this week’s episode of WandaVision has led to My Chemical Romance fans making an interesting connection.

As it turns out, My Chemical Romance technically exist in the Marvel Cinematic Universe. Since this article will go over things that happened in episode seven of WandaVision, here is your SPOILER WARNING.

Due to the COVID-19 crisis, Marvel Phase 4 has seen various delays at the cinemas. While Marvel fans wait for Black Widow to finally hit the silver screen, WandaVision has been giving Disney+ subscribers the entertaining content we all need this year.

For every weekly episode, WandaVision pulls inspiration from past decades and legendary sitcoms of the past. Earlier this month, the Disney+ show channeled the late ’90s and early ’00s in a new episode that kicked off with a Malcolm In The Middle-inspired theme song. As it turns out, the sitcom theme song spoof was voiced by Bikini Kills‘ Kathleen Hanna.

Now, it looks like episode seven of WandaVision included another big crossover. This week, Scarlet Witch and Vision transitioned into the mid-2000s. Throughout the latest MCU installment, the couple handles the fall out of their latest decisions and their relationship with Agatha Harkness.

During the episode, however, many viewers spotted the kids watching an episode of Yo Gabba Gabba!. The show, which first aired in 2007, has hosted various familiar musical acts over the years including My Chemical Romance, Taking Back Sunday, Jimmy Eat World, Weezer and even the Flaming Lips.

Now, it looks like My Chemical Romance fans believe this Yo Gabba Gabba! and WandaVision crossover proves that MCR are actually part of the MCU. Since Yo Gabba Gabba! exists in the Marvel Cinematic Universe, it only makes sense that all of the people and characters on the children’s show exist too.

I HAVENT WATCHED THE EPISODE YET BUT THIS MEANS THAT MY CHEMICAL ROMANCE IS CANON IN THE MCU https://t.co/m8QzQPGwfm

Read more: Juliet Simms is gone, and Lilith Czar is taking the throne with “King”–watch

yo gabba gabba existing in the mcu means my chemical romance exists in the mcu #wandavision pic.twitter.com/V0z8PTEvBi

Yo Gabba Gabba being in the MCU also means that Weird Al, Jack Black, and MCR also exist there! pic.twitter.com/ckgIeUcnre

Yo Gabba Gabba is in #WandaVision which means that My Chemical Romance are canon in the MCU. That is my takeaway today pic.twitter.com/heg4ddsg6V

Read more: I Call Fives announce their return with a new Saves The Day cover–listen

#WandaVision A friendly reminder that if Yo Gabba Gabba is in the MCU that means that My Chemical Romance is too. Take that as you will. pic.twitter.com/U9rhH6doX1

Yo Gabba Gabba is canon in the Marvel cinematic universe, implying My chemical romance is also canon, implying joe rogan canonically exists in the mcu canon, which would then in turn imply that Robert Downey Jr is still alive in the MCU, even though Iron Man is dead

Wandavision spoilers: since Yo Gabba Gabba is now cannon, does this mean that @MCRofficial now exist in the Marvel universe?

Read more: Papa Roach and FEVER 333’s Jason Aalon Butler have a collab on the way

Now, for those of you who struggled to watch the new episode of WandaVision on Friday morning, there’s a good reason why. Disney+ actually suffered an outage on the morning of Feb. 19.

According to outage tracking website Downdetector, a huge spike in user-submitted problems was reported on Friday. Just after midnight when the new episode dropped in the U.S., the reported problems rose from zero to over 8,000.

The site further reports that most of these outages happened on the West Coast, mainly in the Los Angeles, San Francisco and Seattle areas. Despite the number of problems submitted, customers were reportedly able to stream WandaVision about 10-15 minutes after the outages first began.

#wandavision10s #WandaVision lol they really gonna throw every code at me to make me wait my turn pic.twitter.com/0riPi1xSoa

What are your reactions to My Chemical Romance technically being part of the MCU? Let us know in the comments below.

balkan pharmaceuticals enandrol Gets A Redesign

Sublime Get Their Own Graphic Novel Via Z2 Comics: ‘Sublime: ‘$5...

Straightforward Ways to Gain Control of Your daily life – Global...

See which song your zodiac sign should listen to this St....

balkan pharmaceuticals enandrol Gets A Redesign