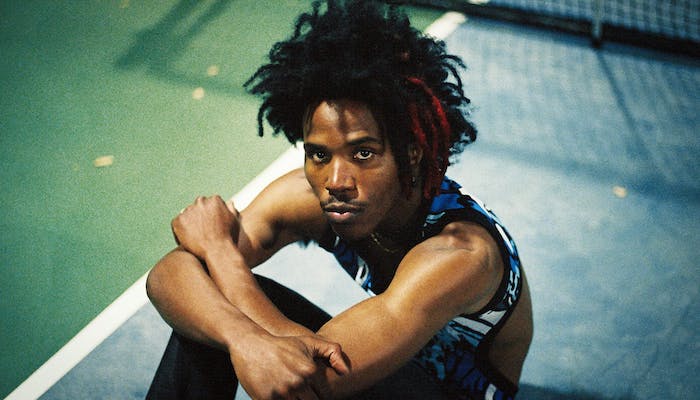 Singer, rapper and a true-to-form poet, DE’WAYNE is changing the scope of rock ’n’ roll and punk as we know it. His aggressive and brilliant sound is exactly what new audiences didn’t know they needed after just one listen.

This year began strong with the release of his high-energy solo track “I Know Something.” Now, his most recent song “Perfume,” featuring Awsten Knight of Waterparks, is taking over the alternative airwaves and boosting this Hopeless Records artist to new heights and new audiences. And that’s not the only feature we heard from him this year. DE’WAYNE also worked alongside the Maine’s frontman John O’Callaghan on his solo project John The Ghost for “HERE/GONE.”

Read more: Rina Sawayama’s debut was always going to be as weird as she wanted

Without a shadow of a doubt, this is only the beginning for DE’WAYNE, who is currently teasing a new release for April 14. We had the chance to chat with the singer about how he grew into his sound, carved out his own space in the scene and how he hopes to grow his circle.

You’re a genre-bending rapper and punk artist. How do you blend these different influences and make it feel so effortless? And you keep all of your songs unique, with no two sounding exactly the same, but they are all you. How do you make that happen?

I’m such a student of music. Even before this call, I’m just jamming [to the] Velvet Underground. Lou Reed is one of my idols, but then I’ll be listening to some of the hardest rap stuff. So, I grew up on rap music, but then [in] the past four or five years, I’ve been studying the art of just writing songs. I really just think it’s a study. I didn’t go to college, but I was just studying this, and I trust my taste and trust the people around me. My message is just the same as far as really trying to write a great song. I try to understand them and put all of the things that I love into one being. At the moment, I think we’re doing a good job of it. And I know it’s tough to do with blending those genres, but just studying it, I think, is really paying off for me so far, just being a student of the game. I want to write really great songs, and I’m happy that people are starting to see that and understand that I can do that.

“I Know Something” was your first single of 2021. How did this song come together?

I was talking to producer Drew Fulk, who has done incredible rock music and rap music. He’s worked with a lot of people, and that was our first session—I wanted to impress the hell out of him. He put this beat on and started playing the guitar, and I freestyled like 70% of the song. He was like, “That’s it.” I was just pumped and amped to be working with him and to be making a record, and I was speaking on things that I feel are about to happen and being confident and being strong in myself. It’s like, “I know you guys don’t quite know yet, but there’s a new wave of alternative music that’s happening right now, and I really want to put my flag in the ground and stand for that.” And that’s what I was speaking on, that type of stuff on the song, and on being Black in America. That’s always something that I don’t try to put in my songs. It’s just very natural for me to do. So, it was those two things that I was speaking on in those songs. So, just seeing into the future and understanding that, I think myself and the circle are about to really do some things in the industry.

What do you hope for the future of alternative music? What do you see?

I see a lot of me and my friends being involved, to be honest. I see it being way more open. I still see things, even as we put the song out a couple of days ago, and people were just like, “This is not rock music!” I’m just like, “Guys, it’s 2021.” So, if anything, I just think that it looks more like me. I really do. I think I still have strong songs and powerful songs. You dress sexy, and you do what you want. You wear glitter or you wear dresses and all those types of things. It’s still powerful, but it looks a bit different. It looks a bit more like a mirror. I also really just hope that alternative is for every type of person. And I think it is. I think some of the people who are making the better music right now are the people who look a little different. I really want to be here for a long time with this alternative music, rock, punk, whatever it’s going to be called. I want to be here.

What messages are you really hoping fans take away with them when they see you?

It’s just that they can be themselves. I talk to and I try to DM back everyone, and they’re saying, “You’re completely yourself, and you’re so free.” And I’m like, “Please do the same.” You don’t think my mom was like, “DE’WAYNE, what are you doing?” You don’t think she was like that at first? Of course! I’m from Texas. I come from a religious family. They’re like, “Why are you shaking your ass and got your abs out, performing in front of these kids?” But after a while, they started to understand it, and it was because I took the values that they were giving, but I was doing my own thing. And that’s what I want people to understand. It’s our life to live. You have to do what you want. You’ll be happy at the end of the day. I know it’s a simple message, but it’s a very important one. Also, my fans being so young, too. They still have their parents in their ear every second. Listen to it, understand it but also learn yourself. That’s what I try to give in my live shows and give in my music. I’m speaking on things that I want to happen and that are slowly happening in my songs. I’m always looking in the future. I’m saying that’s what I don’t understand as well as myself. So, I just want to be liberated.

So what’s next? What do you hope for yourself in the future and your sound?

First off, I want to put out a really brilliant, great debut album. You know, something that I’m proud of, something that I’ll be able to listen to next year and in five years. I want to do that, and honestly, I just hope this isn’t silly, but I want songs to start being on the radio. I want to get into that type of thing. I’m ambitious. As far as right now, I just want to put out a great album. I really want songs to just start connecting over the world with these people, and I want the circle to grow into millions of people. So, just to put out brilliant music to keep going, to grow the circle and maybe bring home an award that my mom would be proud of.

The full interview is featured in Alternative Press’ 100 Artists You Need To Know, which is available here.

The post DE’WAYNE sees a place for everyone in alternative music appeared first on Alternative Press.

Jethro Tull Celebrates 40th Anniversary of ‘A’ With Box Reissue

The 5 Most Expensive Hard Rock Music Videos of All Time

JP Saxe and Maren Morris Give Live Debut of ‘Line by...