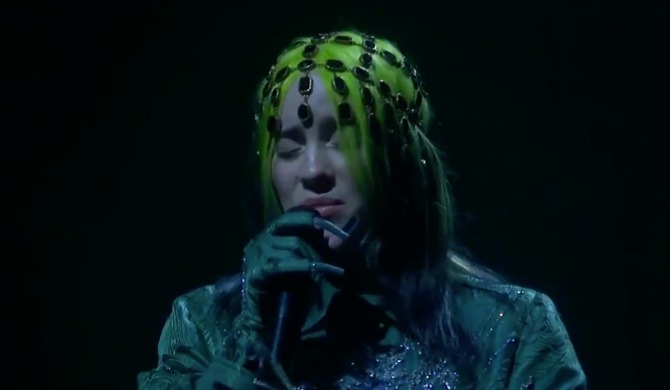 Billie Eilish returned to the Grammys after her historic sweep last year to give a moody performance “everything i wanted” with FINNEAS by her side.

Eilish transformed the Grammys stage into the music video set for the track, featuring a wrecked car and a dark and stormy atmosphere.

Finneas played piano and sang back vocals alongside his sister in another emotional performance that further proves just how angelic Eilish’s voice is. She also wore a glittery baggy outfit and bejeweled headpiece reminiscent of last year’s performance.  You can check out a video of their performance below.

WATCH: @BillieEilish performs her #Grammy nominated song “Everything I Wanted” at the #Grammys pic.twitter.com/Ra2aRipAZD

It was her second year performing after a record-breaking debut last year, where she and FINNEAS delivered an emotion-packed version of “when the party’s over.”

FINNEAS played piano beautifully while Eilish belted out the track. They both wore matching glittery outfits that were pretty much everything. You can see videos of that performance below.

According to data provided by Google, Eilish and FINNEAS’s debut was the most-searched performance of the Grammys in 2020.

And the hype to see her perform again was real, after she canceled her WHEN WE ALL FALL ASLEEP, WHERE DO WE GO? Tour due to the coronavirus pandemic.

This year, she’s nominated for Record of The Year, Song of the Year and Best Pop Solo Performance for her song “everything I wanted.”

Also, Eilish already won Best Song Written for Visual Media for her James Bond theme song “No Time To Die,” from the upcoming movie of the same name.

Eilish is also the youngest musician to ever record a James Bond theme song, joining the ranks of others who have handled the task including Madonna, Chris Cornell, Adele and others.

You can check out the full list of Grammy winners here.

Last year, Eilish became the second person, first female and youngest person to win the four biggest categories at the Grammys in one night—Best New Artist, Album of the Year, Record of the Year and Song of the Year. She also won for Best Pop Vocal Album, and her brother/collaborator FINNEAS won Best Producer, non-classical.

All the awards were for Eilish’s debut album WHEN WE ALL FALL ASLEEP, WHERE DO WE GO?, so it was particularly unheard of. The only award she didn’t take home that she was nominated for was Best Pop Solo Performance, but that could change this year.

In Eilish’s recently released documentary The World’s A Little Blurry, she discusses the unusual way she found out about her 2020 nominations — by being abruptly woken up in bed by her parents.

While still laying under the covers, Eilish’s mom read out all of the categories her album was nominated for.

Despite the tour being canceled, Eilish was busy in 2020.  Back in July, she debuted her emotional single “my future” along with an animated video. In November, she treated fans to a carefree video accompanying the new track “Therefore I Am.” More recently, she dropped her highly anticipated collaboration with ROSALÍA, “Lo Vas A Olvidar,” which premiered during a new episode of Euphoria.

Speaking of the next album, she apparently wrote the whole thing in quarantine with FINNEAS. However, it won’t be a record about the COVID-10 pandemic.

“Billie’s album, and my album, they won’t be a bummer COVID record,” FINNEAS previously said. “I have a desperate desire not to release them during COVID-19. It’s the vaccine record! I want it to be the album everyone’s out dancing in the streets to.”

At the end of 2020, Eilish seemingly verified that her new music era may be on the way. In December, she shared a series of Instagram Stories about the status of her new album and her iconic hair color, which she said would change for the next era.

Eilish is also giving back at the Grammys this year by participating in the Grammy Museum’s annual online auction, which goes through March 23. The auction, which benefits the museum and its music education initiatives, includes dozens of items like a signed Taylor Swift guitar, handwritten lyrics that are autographed and personalized by Phoebe Bridgers and tons more.

Eilish’s contribution is a signed ukulele valued at $2,500, which sounds like the perfect collector’s item for a die-hard fan. The charity auction lasts through March 23, so you have plenty of time to place bids after the show. 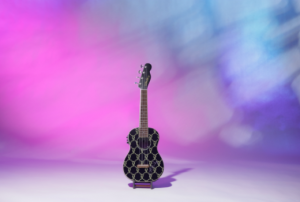 We know Billie is a huge fan of the instrument, as she collaborated with Fender to create her own signature uke.

What did you think of Billie Eilish’s second Grammys performance? Sound off in the comments below!

The post Billie Eilish and FINNEAS play haunting “everything i wanted” at Grammys appeared first on Alternative Press.