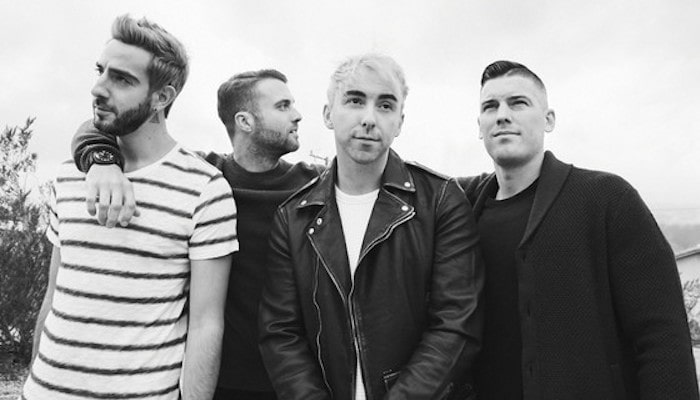 It looks like All Time Low are teasing a new announcement. This week, the band sent fans into a frenzy when they released a series of lotto numbers during a livestream. The numbers eventually led fans to a Wake Up, Sunshine hotline with a cryptic voice message.

Of course, all of this has caused a slew of fan theories to emerge on social media. However, a few clever fans may have already figured out exactly what All Time Low are teasing.

During the livestream, All Time Low released the lotto numbers 12, 14, 19, 87 and 33. Early on, some fans including Twitter user @ranbooofficial instantly noticed the significance of the numbers. As it turns out, the digits represent frontman Alex Gaskarth’s birthday, Dec. 14, 1987, and his age, which is 33.

then the live ended. pic.twitter.com/t0o8XU59WI

Following the release of the numbers, All Time Low posted a tweet that let fans know exactly what to do with them.

Read more: Bamboozle Festival is planning to return in 2023 for its 20th anniversary

Once fans add the lotto numbers to the end of All Time Low’s website URL, they’re taken to a landing page for the band’s Win For Life Lotto. According to the site, fans can win a “once-in-a-lifetime prize” if they win the lottery.

After hitting “click here,” fans are redirected to another page with the phone number 410-914-1257 and a link to phone.alltimelow.com. Once fans call or click the URL, a cryptic message can be heard.

The voice message is from a Wake Up, Sunshine Morning Show host Sharon who repeats the lotto numbers All Time Low previously announced. However, the message further says that another round of numbers is being released on Tuesday, March 23 at 9 a.m PT. As well, the name of the morning show is a direct reference to All Time Low’s latest album. So, it’s possible they may be teasing something regarding the LP.

Of course, some of All Time Low’s fans may have already figured out exactly what the band are teasing. Since the first round of lotto numbers was Gaskarth’s birthday and age, fans separately entered the birthdates and ages for guitarist Jack Barakat, drummer Rian Dawson and bassist Zack Merrick into All Time Low’s website URL.

As a result, fans found three webpages that each include images from what appears to be a recent All Time Low video shoot. All of this may have confirmed a new music video is on the way. After entering Dawson’s Dec. 18, 1987 birthday and age, which is 33, fans are directed to an image of a blurred-out video screen.

Similarly, once fans enter Barakat’s birthday, June 18, 1988, and age, which is 32, another image of a video shoot appears. This time, crew members can be seen working inside a house with deep blue and purple lights.

Finally, after Merrick’s April 21, 1988 birthday and age, which is 32, is entered into All Time Low’s website URL, an image of Gaskarth in front of a video camera and crew appears. This further confirms the theory that a new video may be on the way.

So far, All Time Low haven’t confirmed exactly what they’re teasing. However, the discovery of these photos has a lot of fans convinced a music video is on the way. Some theorize All Time Low may finally be releasing a video for “Monsters (feat. blackbear).” Meanwhile, others think it could be a video for a different song off of Wake Up, Sunshine.

I just saw these pictures on an All Time Low fan page, looks like we’re getting a music video (maybe for Monsters) pic.twitter.com/0p3FMd9YzV

i’m telling you now, it’s gonna be a wake up sunshine or clumsy music video that all time low is hinting at please it better be

ALL TIME LOW IS GONNA DROP A NEW VIDEO?! IS THIS THE CLUE IS THIS IT BECAUSE I AM SUSJBSUEBEB

More on All Time Low

All Time Low’s most recent music video was released back in December. After sharing various cryptic clues on social media, All Time Low confirmed they were teaming up with Demi Lovato for a remix of their hit “Monsters (feat. blackbear).” Along with the remix, they also put out a spooky animated video that’s filled with werewolves, vampires and, of course, plenty of monsters.

Gaskarth revealed on Twitter that this collab with Lovato has been nearly ten years in the making.

“Let’s go,” Gaskarth said on Twitter. “Celebrating this song by getting another REAL one to absolutely shred it with us feels very nice. A collab ten years in the making. Big @ddlovato.”

Let’s goooooo!! Celebrating this song by getting another REAL one to absolutely shred it with us feels v v nice. A collab ten years in the making. Big 🖤 @ddlovato https://t.co/qM3EJLyPh6

Read more: Architects announce 2022 ‘For Those That Wish To Exist’ UK arena tour

In the past, Lovato has teamed up with a few artists in the scene including We The Kings for “We’ll Be A Dream” and Fall Out Boy for “Irresistible.” Most recently, in May, blink-182’s Travis Barker produced an emo rock remix of her hit single “Love Me.”

All Time Low and blackbear have achieved great success with “Monsters” since the release of Wake Up, Sunshine in April. The song eventually went on to peak at No.1 on Alternative Radio. This feat marks All Time Low’s first-ever No.1 at radio. The success of “Monsters” eventually led to All Time Low’s network television debut performance on Good Morning America.

Over the past few months, All Time Low have grown in popularity on TikTok. Their classic song “Dear Maria, Count Me In” is at the center of a viral trend that quickly caught Gaskarth’s attention. Eventually, All Time Low joined in on the trend and created entertaining TikToks of their own.

Young Renegades centers around an interesting twist of events in the lives of main characters Connor and Becca. On the very same night as their 10-year high school reunion, the two classmates find themselves on a scavenger hunt for clues that will lead them to a top-secret All Time Low gig. However, they soon notice they are gravitating towards each other in ways they weren’t expecting.

Read more: Metallica turn the US national anthem into the ultimate guitar shred—watch

Along with the comic book, All Time Low are also putting out limited edition Young Renegades vinyl and art prints. Pre-orders for the graphic novel are available here.

“We’re extremely excited to announce the ‘Young Renegades’ official graphic novel, along with a limited edition vinyl LP, exclusive art prints, and more,” All Time Low tweeted. “This is a first for us and we can’t wait for you to read it.”

We’re extremely excited to announce the ‘Young Renegades’ official graphic novel, along with a limited edition vinyl LP, exclusive art prints, and more. This is a first for us and we can’t wait for you to read it.

Earlier this week, All Time Low made their first-ever appearance on The Ellen Show where they performed “Monsters.” Their full performance is available to watch below.

Do you think All Time Low are getting ready to release a music video? Which song do you want them to release a video for? Let us know in the comments below.

The post All Time Low are up to something, and fans might’ve already figured it out appeared first on Alternative Press.

Grimes Will Put You to Sleep With ‘AI Lullaby’

See Motörhead Blaze Through ‘Rock It’ From Upcoming LP

How This Father Took a Failing Franchise Restaurant and Doubled Its...

Eyedress knows exactly what it’s like to make something out of...

Trump: 'November Rain' Is the 'Greatest Music Video of All Time'