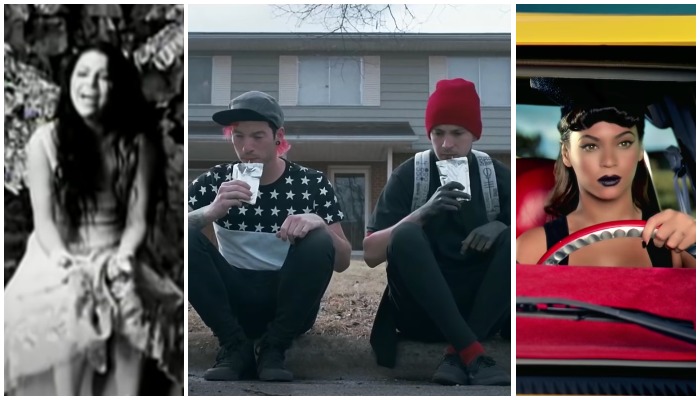 Ever wonder where your favorite artist filmed that one music video? While the answer is probably some private set in Los Angeles, a handful of music videos were actually filmed in public locations. With the weather warming and in-person concerts still on hold, why not support your favorite artists by visiting the sets of their music videos? Whether you’re in the United States or abroad, these 15 iconic music video locations are accessible to the public and free of charge.

“Miss Jackson” – Panic! At The Disco

Sorry kids, but Brendon Urie lied to you. The music video for “Miss Jackson” doesn’t actually take place in Las Vegas as the opening timestamp shows. The dingy motel in the video is actually the Motel 6 in Barstow, California. Just northeast of Los Angeles and a few hours outside of Las Vegas, you can visit and stay at the Motel 6. And no, we don’t know which exact room Urie filmed in.

With another deceiving backdrop, the music video for “Centuries” by Fall Out Boy wasn’t filmed at the Colosseum in Rome, Italy (although that would be cool) but at Fort Henry in Ontario, Canada. If you’re anywhere near Kingston, Ontario, make a day trip out of visiting the historical site the band used for their Roman-inspired music video.

If you’re a fan of Halsey and horror, you’ll definitely want to visit this set whenever you’re in Los Angeles. The music video for “Colors” was shot at the Alfred Rosenheim Mansion, aka the American Horror Story murder house. The mansion was sold in 2015 for over $3 million but is still easily accessible by street view in the Mid-City district of Los Angeles.

If you’re in a gloomy mood and live anywhere near Barcelona, Spain, visit Plaça Sant Felip Neri to see where Evanescence filmed the somber music video for “My Immortal.” Fittingly filmed in Barcelona’s Gothic Quarter, you can roam around the plaza and visit the fountain singer Amy Lee performs on.

blink-182 shot their first music video in their hometown of San Diego, California. The trio, with previous drummer Scott Raynor, are seen galavanting and goofing around Belmont Park in Mission Beach. Known for its roller coaster and beach boardwalk amusement, Belmont Park is free and open to the public.

Lady Gaga‘s music video for “Telephone” is considered one of her best. With the Diet Coke hairdo, the Kill Bill pickup truck and a killer dance scene after poisoning an entire restaurant, “Telephone” is peak Gaga. And if you find yourself roaming the Mojave Desert, you can visit the exact diner “Telephone” was shot at. The Four Aces Movie Ranch is located at 14499 E Ave. Q in Palmdale, California. While you’re only allowed around the exterior of the diner, grab your telephone for the perfect photo op.

The music video for “Human” by the Killers was shot at Goblin Valley State Park in Utah. While there are no tigers or other exotic animals found in the music video, Goblin Valley is open to the public for hiking, camping and wondering if you’re human or dancer.

“The Hills” – The Weeknd

After you’ve stopped by the American Horror Story murder house on your tour of L.A., drive a few blocks north to 639 South June St. to find the block the Weeknd filmed “The Hills” music video. All along South June Street, you’ll be able to identify the houses seen in the background of the video, as well as where the Weeknd crawls out of his wrecked car.

Grab your shutter shades and Silly Bandz because we’re going back to the late ‘00s. You can see where 3OH!3 and Katy Perry filmed the music video for “STARSTRUKK” by visiting Exposition Park in central L.A. More specifically, head over to the rose garden portion of the park to see the exact fountain they filmed at.

What we really, really want is to stay at the St. Pancras Renaissance Hotel, aka where Spice Girls filmed their music video for their most popular song, “Wannabe.” With its striking gothic features, this five-star hotel isn’t hard to spot when you’re walking the streets of London. However, rooms start around $346 a night, making it one expensive music video set.

“Never Gonna Give You Up” – Rick Astley

We promise we’re not intentionally Rickrolling you with this one. If you’re a Rick Astley fan (and who isn’t?), you can explore the streets where Astley filmed the internet’s favorite music video. Visit the Borough of Harrow in London to see where Astley danced his way to our hearts in the ‘80s—and then again in the ‘00s.

“Do You Realize??” – The Flaming Lips

Fremont Street is undoubtedly the most popular street in Las Vegas outside of the strip. So of course it makes for the perfect backdrop for the Flaming Lips’ transcending song “Do You Realize??” Encompassed by dazzling lights, Fremont Street is also known for appearing in other music videos such as “Waking Up In Vegas” by Katy Perry, “24K Magic” by Bruno Mars and “Heartless” by the Weeknd.

“Stressed Out” – twenty one pilots

twenty one pilots lament the pressures of adulthood in “Stressed Out,” which is one reason they chose to shoot the music video in their hometown of Columbus, Ohio. The duo are seen drinking Capri Suns and riding tricycles around the suburban streets in true millennial fashion. However, the exact neighborhood and streets are unknown, making this location a bit harder to find.

Lana Del Rey has definitely secured the most outrageous filming location on this list. Her music video for “Born To Die” was filmed at the Palace of Fontainebleau, a royal chateau just outside of Paris. The palace, built in medieval times, is now a museum that’s open to the public. If you’re wondering what that grandiose room is that Del Rey filmed in, it’s the Chapel of the Trinity.

If there’s one silver lining to No Doubt‘s 2004 hiatus, it’s that Gwen Stefani‘s solo career gave us some true ‘00s anthems. In her music video for “Cool,” Stefani is seen frolicking around Lake Como in Italy with her former boyfriend. Lake Como, set against the Alps in Northern Italy, is also where Villa Erba, the villa in the music video, is located as well.

It looks like Wendy’s is a big fan of My Chemical...

How to Protect Your Small Business Against Fraud

Win a Free Lamb of God Ticket for 'Ashes of the...

Badflower don’t care if you’re pissed off as long as you’re...

How to Build a Fully Remote Workforce

Metallica to Perform on Super Bowl Edition of 'Colbert'