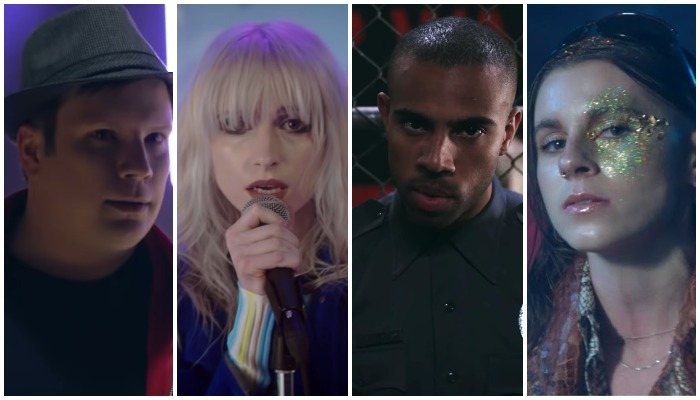 Defining artists with genres is futile, as new music seems to progressively blend and smash traditional genres out the window.

And it’s not even just experimental artists who are doing it. Some of our favorite musicians have tried out a bunch of different sounds and have evolved over time to make genres of their own creation.

We’ve decided to round up 10 times artists tried out different genres for the better to prove that no one, not even record-breaking musicians, can be put in a box. You can check those out below.

If you need one solid example that genres are a thing of the past, look at Poppy. She’s made a clear transition from making pop songs to metal music in the past couple of years. Now, she blends rock, electronic, pop and more to create tracks that can only be described as Poppy. If you look back into the depths of YouTube to hear her old bubblegum-pop songs, she’s definitely progressed for the better with her hardcore/metal tracks, starting with her latest album, I Disagree.

Machine Gun Kelly made a huge transition this year when he released his fifth album, Tickets To My Downfall, which was filled with pop-punk tracks. While the musician has delved into the genre in the past with rock-driven tracks and by collabing with artists such as Travis Barker and YUNGBLUD, the release leaned even further into his alternative influences. Even though he can spit bars as good as any rapper, there’s something about his vocal style that makes him fit in so perfectly in the scene. If you don’t believe us, just listen to him sing on “forget me too” featuring Halsey and try to tell us different. If the album’s No. 1 spot on the Billboard 200 is any indication, fans are loving it too.

While Paramore will always be considered pioneers in the pop-punk scene, 2017’s After Laughter was a diversion that worked. The record, which still contained the heart-wrenching and relatable lyrics we know from the band, took inspiration from ’80s pop. While some people missed the band’s heavier tracks, the narrative behind After Laughter is the clearest, and it’s one of their most honest albums. If anything, it proves that Paramore can always get their message across and sound good while doing it. We can’t wait to see what they do next which, hopefully, if eagle-eyed fans are right, will be sometime soon.

Bring Me The Horizon

After a three-year hiatus, Bring Me The Horizon dropped amo in 2019 and showed they could succeed in making music that isn’t metal. The record takes on electronic, pop and rock influences with ease. After listening to it, you’ll wonder why it took them so long to experiment with those genres to begin with. While some people weren’t fans of their stray from metal, which Oli Sykes even addresses in the song appropriately titled “heavy metal,” it only reminds you that you can’t put them in a box. It’s obvious from this album that the band have a lot more to show us, which makes us even more excited to hear their upcoming four-part anthology project, POST HUMAN: SURVIVAL HORROR.

Vic Mensa is an expert at flip-flopping genres seamlessly. He dropped a rap EP in 2018, a punk project and album, 93PUNX, in 2019 and then another rap EP this year without missing a beat. But it doesn’t matter which genre he’s creating music in or who he’s collabing with. His overall message of social justice and criticizing the current social and political state of the world always shines through.

YUNGBLUD makes music with a meaning, not a genre. He’s shifted his sound several times, mixing alternative, pop, rock, indie, hip-hop and more. No matter the sound, he always has a bigger message and advocates for issues he believes in. If you had to label it, especially in 2020, YUNGBLUD makes protest songs and fight anthems. We’re sure that he’ll blur genre lines even further with his upcoming album, Weird!, when it arrives.

Finding the perfect genre to describe Fall Out Boy is harder than you’d think. They’re emo veterans at their core but have always sounded distinctly different from other genre acts. With their more recent releases, particularly their 2018 album, MANIA, it’s easier to describe them as rock, but with undeniable electronic, alternative and pop influences. While some people may miss FOB’s old pop-punk sound, they’re evolving by delving into other genres.

PVRIS are another band with rock roots who have heavily embraced an electronic sound, but no one’s doing it quite like them. With their 2020 release, Use Me, where vocalist Lynn Gunn took the reins, PVRIS delivered one of their most vulnerable and complex-sounding records to date. If performed by another band, you could classify some of the songs as outright pop tracks. But Gunn’s vocals keep it grounded in the alternative realm despite the shift.

Miley Cyrus went from Disney star/country singer to a pop star to a hip-hop artist to a rock vocalist in a matter of years and only gets better with every progression. Once performing under the Hannah Montana moniker, Cyrus has grown up, and so has her music. She’s preparing to drop her first-ever rock album, Plastic Hearts, in November, which has been in the works for two years. Cyrus has said it’s a new chapter in her life, and knowing how she’s completely bodied rock cover songs by Metallica and other veterans in the past, we’re anticipating this may be her best record yet.

While Travis Barker has never strayed from his roots of drumming for blink-182, he’s expanded the genre pool that he works in throughout his career. He’s gone from working on projects such as +44 and Box Car Racer to collabing with Halsey, MGK, nothing,nowhere. and more. It doesn’t matter which genre of song he’s playing on because you can always tell that it’s Barker’s signature sound.

The post 10 times artists completely changed their sound for the better appeared first on Alternative Press.

A Chinese Rocket Is Expected to Fall Back to Earth, But...

Lil Baby Drops Video for ‘Real As It Gets,’ First New...

How to invest in the stock market to make money