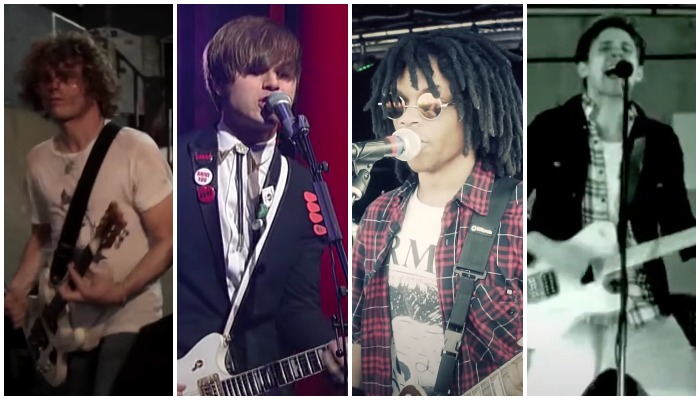 When the ball dropped in New York City’s Times Square at the stroke of midnight Dec. 31, 2009, punk rock had been around 35 years. (Or 33, depending on if you date the subculture from when the Ramones began playing gigs or from the mythic Punk Year Zero of 1977.) It was well into its third decade as the 21st century entered its second. There was now plenty of history from which new bands could draw inspiration—not just punk history. It no longer had to come from the Ramones or the Sex Pistols. In the case of the Jim Jones Revue, it could originate in the 1950s. In that of the Strypes, it would be the ‘60s.

Read more: 15 essential post-punk bands who represent the evolution of the genre

The major characteristics that these great punk guitarists of the ‘10s shared was a love and respect for punk tradition. They understood they were walking in the footsteps of giants. But all were youthful enough to wonder, “Do we have to do things the same way we always have just because that’s how it’s always been done?” Maybe they had a metal background and desired to bring that molten riff logic to the form. Perhaps they saw nothing wrong with referencing some of the theatricality of Queen in their melodies or dynamics. They also (almost) all employed modern amplification, rather than vintage Fenders or Marshalls. Their tones tended to be heavier, thicker and even more distorted than the ones on your average record cut in 1977.

Read more: 10 modern punk bands who are channeling acts from the first wave

Whatever the case, some of the most exciting, most individualistic punk guitar approaches happened in the last decade. It was no longer enough to downstroke 1,000 MPH barre chords and throw in a Johnny Thunders lead. Thus, it’s Alternative Press’ pleasure to present the 10 best punk guitarists of the ‘10s.

SIGNATURE MOVE: As the late ‘00s dissolved into the teens, London’s Jim Jones Revue—fronted by the former mainspring of late ‘80s Stooges avatars Thee Hypnotics—recklessly drove the shit-kicking spirit of ‘50s rock ‘n’ roll straight into the “Kick Out The Jams” sensationalism of MC5 at about 150 MPH. Their records were more distorted than such ‘90s lo-fi garage acts as Teengenerate, and their stage show could trigger cardiac arrest at 500 paces. For an outfit so steeped in the piano-demolishing boogie-woogie spirit of Little Richard and Jerry Lee Lewis via the keyboard histrionics of first Elliot Mortimer, then Henri Herbert, the Jim Jones Revue certainly unleashed plenty of high-wattage violence via guitarist Rupert Orton. The brother of British neo-folk artist Beth Orton, he served as a pompadoured bridge between Chuck Berry and the Damned’s Brian James on a Gretsch Roc Jet—solid, blues-based rock ‘n’ roll explosiveness. Much missed since the band’s 2014 dissolution, he now works behind the scenes as a prestige promoter for the PRB Presents organization.

SIGNATURE MOVE: “We just wanted to play very stripped-down punk,” School Jerks drummer Ivan told the Equalizing Distort blog in 2009. (No, none of these guys were big on surnames.) “It is really simple and juvenile.” These then-teenage Torontonians were the most convincing throwbacks to early hardcore’s delinquent spirit the modern world’s seen. Little was known about Ivan, Ben, bassist Matt and lead screamer Luke other than they seemingly could barely be bothered to be a band. They rarely gigged and only issued three seven-inch EPs, two cassettes and one LP—13 songs in less than 15 minutes, revolving at 45 RPM—that would’ve blasted nicely between Black Flag and Germs on “Rodney On The ROQ” in 1981. Besides Luke’s vomit-toned vocals, Ben’s slashing, sidewinding, post-Greg Ginn work on a Gibson Les Paul Special definitely stood out against the uber-tight rhythm section. Following School Jerks’ 2012 release, they were rarely heard from again, likely for the same reason they barely had any web presence and no band photos to speak of—they didn’t care. It was the best punk album of the last 10 years.

CLAIM TO FAME: Amyl And The Sniffers

SIGNATURE MOVE: Since 2016, Melbourne boogie-punks Amyl And The Sniffers have been making music resembling a carload of 45s by Slade, AC/DC and Ramones surviving a bad wreck, the pieces haphazardly reassembled. They went from forming the band as a lark—writing, recording, mixing, mastering and releasing their first four-song EP within 24 hours—to playing all over the world and releasing an explosive 11-song debut album three years later. Besides spitfire vocalist Amy Taylor’s reckless charisma, the band’s secret weapon is mulleted guitarist Dec Martens, who efficiently manhandles a Fender Strat like some weird Malcolm Young/Ginn mutation.

CLAIM TO FAME: The Strypes

SIGNATURE MOVE: All roughly 15 when they formed in Cavan, Ireland, in 2010, the Strypes caused a huge stir by playing a viciously jacked-up version of 1965 British R&B that suggested the Yardbirds getting mugged in the alley behind The Marquee by the Wilko Johnson lineup of Dr. Feelgood. Live, they possessed all the manic energy of the 1977 Clash, as they crunched through the Chess Records catalog and their airtight, dangerous originals. Their secret weapon? Guitarist Josh McClorey’s grime-y Gretsch abuse, with his sick vibrato and dangerous pentatonic runs. As good at 17 as Jeff Beck was at 21, he’s pursuing a solo career in wake of their 2018 dissolution.

SIGNATURE MOVE: A mighty force on the Austin, Texas, garage-punk scene from the late ‘00s and into the ‘10s, Orville Bateman Neeley III is a musical polymath equally capable on guitar, bass, drums or behind a recording console. Serving time on any of those instruments with A Giant Dog, the Bad Sports, the Pumpers, John Wesley Coleman III, the Best, Bleach Boys and James Arthur’s Manhunt, his core band became the OBN IIIs. Named for his initials, what began as a lark to fill a slot at a club where he mixed sound became this Stooges filtered through ’80s Australian punk powerhouse. By the time they moved to a punk take on ‘70s AOR, he strapped on a Gibson SG, weaving gnarling twin lead figures with Tom Triplett.

CLAIM TO FAME: A Giant Dog

SIGNATURE MOVE: “Without Andrew, I’d be like Liz Phair, probably.” Sabrina Ellis, frontperson for prestige Austin bands A Giant Dog and Sweet Spirit, spoke those words to this writer in The Austin Chronicle five years ago. She was talking about the unique chemistry she enjoys with Andrew Cashen, her guitar-slinging/co-songwriting partner in both bands. Part of a core of aspiring rockers growing up in the Houston suburb of Spring, including Neeley, Cashen is the Keith Richards to Ellis’ Mick Jagger: He creates the music and the riffs, grinding out from his Gibson SG a crash-chord racket similar to vintage Damned jamming with Queen, as Ellis acts out a psychodrama upfront. He’s one of modern punk’s MVPs.

SIGNATURE MOVE: Flesh Lights were one of Austin’s best garage-punk outfits for 10 years. Their debut LP, Muscle Pop, smashed along at reckless MPH like the corpse of NYC’s Devil Dogs dancing at the end of overamped electrodes. Their second LP, Free Yourself, channeled vintage Cheap Trick like it meant to live up to the first one’s title. And their final LP, Never See Snow, bridged the two extremes. Front and center: Unassuming Max Vandever, the band’s main songwriter, lead singer and an Epiphone abuser of the highest magnitude. His chords were huge, and his tone was thick enough to cover any possible dropout during his gibberingly melodic leads. Much missed since their 2019 farewell show.

SIGNATURE MOVE: The three Radke brothers—Dee, Solomon and Isaiah—of St. Joseph, Missouri, seemed to hit the festival circuit from the moment they formed in 2010. The trio virtually lived there for years, honing a sonic barrage that caressed as much as it battered, like classic Bad Brains tackling the Misfits songbook. Key to that was Dee’s Danzig-esque croon. But seeing the dreadlocked frontman live is to truly appreciate how potent his Les Paul taming was. He employed a stocky tone that builds skyscrapers out of his chords, while his leads slash melodically like an ultra-tuneful razor blade employed surgically.

CLAIM TO FAME: OFF!

SIGNATURE MOVE: In late 2009, L.A. punk icon Keith Morris walked away from a potential Circle Jerks album in which the other members of that punkstitution showed no interest. He took with him producer Dimitri Coats, former frontman for Philadelphia stoner rockers Burning Brides, and a batch of songs the pair wrote for the aborted LP. With Redd Kross bassist Steve McDonald and Rocket From The Crypt/Hot Snakes drummer Mario Rubalcaba installed, they became OFF! The musical vibe resembled the hardcore legends Morris initially fronted: Black Flag. Which left Coats to be the supergroup’s de facto Ginn stand-in. But the slab-chords and brief, spastic solos he issues from an old Univox Hi-Flier have an identity of their own.

CLAIM TO FAME: The Sandinistas

SIGNATURE MOVE: This melodic punk trio hail from South Wales, obviously named for the Clash’s 1980 triple album. Unlike the expansive, dub-and-funk-drenched 3xLP, the Sandinistas are closer in attack to the earlier locomotive rock thrills of “Clash City Rockers” and Give ‘Em Enough Rope. Except their idea of a political song is a sarcastic romantic ode to Melania Trump. They’ve crafted six loud singalong singles since forming in 2016, centered around the anthemic songwriting and cranked-up guitar work of singer Dan Hagerty, who bears a striking resemblance to ‘50s British rocker Billy Fury. His Telecaster roar is full of the tuneful filigrees that were Clash lead guitarist Mick Jones’ stock-in-trade.

The post 10 punk guitarists who took a unique approach to the genre in the ’00s appeared first on Alternative Press.

Hear How Beck Turned Paul McCartney’s ‘Find My Way’ Into a...