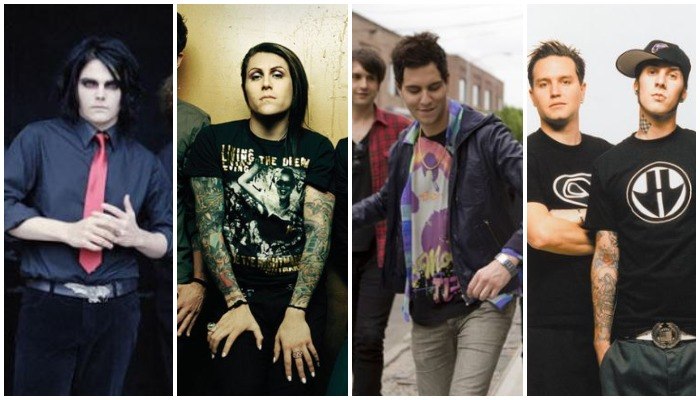 In a culture driven by instant gratification, it’s important to start off on the right foot when putting out content. This of course doubles for music, especially now that streaming services put a seemingly endless number of albums at our fingertips.

Fortunately for the alternative music scene, starting off strong has been a long-set precedent. Going back beyond iTunes album samples to the days of predominant physical distribution, artists have made a habit of hooking their listeners with killer opening tracks.

Of course, some have been more effective than others. Read on for 10 of the best tracks that have opened some of our favorite scene albums.

There’s no denying that Armor For Sleep‘s “Car Underwater” is one of the most iconic emo tracks of the 2000s alternative scene. With that in mind, it only makes sense that it would be the one to open their renowned sophomore album, What To Do When You Are Dead. The subdued energy up top seamlessly introduces the dark ambiance. However, it’s not long before it jumps into the angsty, raw aggressiveness that characterizes the rest of the record.

“The City Is At War” – Cobra Starship

If you had a Myspace page circa 2007, you probably remember Cobra Starship‘s “The City Is At War” playing on every other profile. The edgy, catchy-as-all-hell hit notably kicked off the band’s ¡Viva la Cobra! album. Jumping headfirst into their upbeat, neon-pop energy, the track is inarguably a perfect demonstration of their sonic refinement since While The City Sleeps, We Rule The Streets.

“Everything I Ask For” – The Maine

It’s not common for a band to totally hit their stride with their debut album, much less the first song on it. If any group were going to do it, though, of course it would be the Maine. Bear in mind, singles weren’t yet a popular release format in 2008, so “Everything I Ask For” was the first taste fans got of Can’t Stop Won’t Stop. No surprise, the sunny alternative hit still persists as one of their most popular songs, even over a decade later.

Read more: QUIZ: Are you really as emo as you think you are?

Admittedly, it would be impossible for blink-182 to have started 2003’s Untitled with a less-than-great song. Seriously, that tracklist is a raging success all the way through. That said, though, we couldn’t pick out a better choice than “Feeling This.” The rousing pop-punk anthem kicks the album off on a high note before diving into its thematic depths. In fact, Mark Hoppus explained that the track’s famed fade-out ending was actually the result of a studio accident. We wouldn’t have it any other way, and evidently neither would the frontman, who revealed the song as his favorite from their discography.

No lie, Paramore have more flawless albums than most bands have standout tracks. And, in typical fashion, they all start off strong. So when we put forth 2007’s “For A Pessimist, I’m Pretty Optimistic” as the epitome of the band’s talent for creating great openers, understand the significance. The success of the song comes from its temperamental structure, with each verse exploring a different mood and pace than the one before it. It’s chaotic but cohesive, setting the foundation for Riot! as a whole.

Evanescence are another band that set some serious standards with the first song on their debut album. Unlike the Maine, however, the outfit’s initial EPs weren’t widely available. So, for most early fans, “Going Under” wasn’t just the first song they heard off Fallen—it was the first Evanescence song they heard ever. They really couldn’t have picked a better track that represents their signature nü-metal theatricality.

Read more: 10 lyrics from the 2000s that you definitely used for a Facebook status

Do you think My Chemical Romance knew in 2004 that the leading track on Three Cheers For Sweet Revenge would persist as a scene favorite for nearly two decades? We can’t say that we’re surprised at all. “Helena” fades in beautifully, easing the listener in before catapulting into a rousing display of the album’s dark and dramatic energy.

“Jamie All Over” – Mayday Parade

“Jamie All Over” leads Mayday Parade‘s most popular tracks on Spotify, so it’s only right that it leads the tracklist of A Lesson In Romantics as well. The song may very well be the catchiest in the band’s entire library (and that’s saying something). It hardly comes at the expanse of substance, though, boasting some of the most heart-wrenchingly relatable lines to come out of the 2000s pop-punk scene. Truly, it’s the quintessential Mayday experience and the ultimate hook for any first-time listener.

AFI‘s Decemberunderground is perhaps most widely revered for bringing songs such as “Miss Murder” and “Love Like Winter” to the scene. But who could forget the minute-and-a-half of rhythmic rising action that sets the intriguing tone of the whole album? The band didn’t underutilize the energizing intro either, using it to kick off both the “Miss Murder” music video and live sets at the time.

When All Time Low dropped So Wrong, It’s Right in 2007, we just assumed it couldn’t be matched. Then we heard “Weightless” in 2009 and realized immediately that we’d been horribly mistaken. The song kicks off Nothing Personal with a catchy, breezy delivery of some heavy themes. It sets a pretty significant standard that the rest of the album effortlessly maintains with its assortment of bubbly anthems.

What are some of your favorite opening tracks? Sound off in the comments!

The post 10 opening songs that made these alternative albums perfect from the start appeared first on Alternative Press.

Green Day Returning to the Stage for ‘NFL Honors’

Resilience Is One of the Most Essential Entrepreneurial Traits. Practicing This...

What’s It Like to Join the E Street Band? Morello Looks...

Whatever happened to Ottawa’s planned tweak to the mortgage stress test?

Queen Find Early Gig Footage, Don’t Know What to Do With...