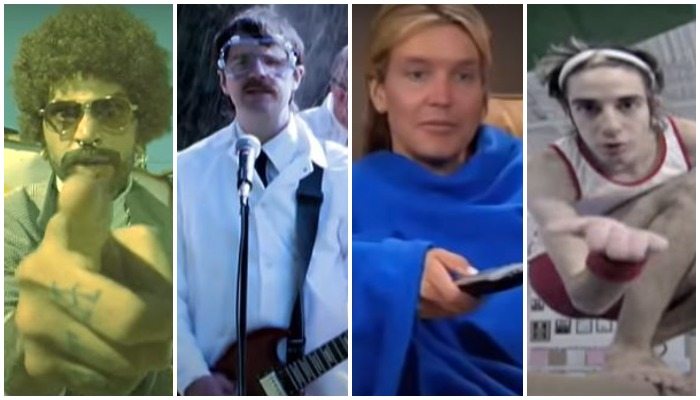 If there’s anything the alternative music community knows how to do, it’s goofing off. Seriously, just try to name a realm of genres better aligned with Razor scooters, stage pranks and off-the-wall music videos.

While every day might as well be National Goof Off Day in our zany counterculture, March 22 gives us an opportunity to reflect on all the hilarity that abounds. Of course, what better way to do that than by watching some of the most absurd displays to come from the scene?

Read more: 10 modern rock bands that prove the genre is far from dead

Here are 10 of the most ridiculous alternative music videos of all time.

Because 3OH!3 weren’t bold enough in their lyrics, they had to make their music videos stand out, too. Admittedly, we could have filled out a hefty list with their catalog alone. But the accompanying video for “HOLLERTILYOUPASSOUT” takes the cake. Is there anything more ridiculous than two grown men taking on a bunch of schoolyard children in basketball? We’ll let you be the judge of that.

Gym Class Heroes have a fantastic way of telling complex stories through their music videos. “Guilty As Charged” doesn’t stray at all from that format. The over-the-top acting and ’70s-nostalgic vibes are nothing short of funny—even with such a dramatic narrative. It’s like an Eric Forman daydream, and we’re here for it

Leave it to Green Day to create one of the most anxiety-inducing music videos of all time. “Walking Contradiction” sees all the members unknowingly causing mayhem and evading certain death as they stroll casually down the street. It’s a very “accidental punk” vibe, one that has us feeling suddenly compelled to check our emergency breaks.

Weezer effectively took internet culture and put it to a soundtrack with “Pork And Beans.” Performing in lab coats and goggles while being sprayed by a never-ending stream of soda would have been ridiculous enough. No surprise, though, they took it even further, incorporating clips from funny YouTube videos that were popular circa 2008. This is truly one of those videos that you needed to watch in the context of its time to even remotely understand.

Take the ridiculous pop-punk music video format but make it totally creepy. Nearly 30 years later, L7 are still fueling our nightmares with “Andres.” Really, there are only so many uncanny masks and mannequin faces that any person can take… And that’s not even touching on all the chaos happening in between. Why do we keep watching it, though?

No doubt, think of iconic alternative music videos and blink-182‘s “What’s My Age Again?” will certainly populate somewhere in your mind. Add “ridiculous” to the query, though, and it’ll probably stand as the most prominent example. We can’t say we were ever totally prepared to see the trio streaking for two-and-a-half minutes. But damn if it didn’t make for one of the most memorable videos of all time.

“The Carpal Tunnel Of Love” – Fall Out Boy

Talk about a quintessential display of mid-2000s alternative culture. Fall Out Boy united with Kenn Navarro to produce a Happy Tree Friends music video for “The Carpal Tunnel Of Love.” True to form, it got ridiculously morbid real fast. Of all the videos on this list, this one may be the most distracting—but that seems to be their overarching style.

Name one other band that have filmed a music video in a sauna, public restroom and/or shower. We’ll wait. Almost a decade later, All Time Low still have us laughing at their ridiculous accompaniment to “Coffee Shop Soundtrack.” Honestly, we can’t decide what’s funnier: the tight performance spaces, the failed stunts or Alex Gaskarth‘s skills with a ribbon.

Could we ever expect anything less from Cobra Starship? The group proved to us from the start that they weren’t there to take themselves too seriously. “Guilty Pleasure” was the pinnacle of their hilarity, though. As if we weren’t going to be tickled enough by the lo-fi roller-skating montage, they really had to go and hit us with an emo strongman and the world’s best-received “karaoke” performance. What we wouldn’t give to have this band back…

“Thanks, I Hate It” – Simple Creatures

If any artists were going to make a list of ridiculous music videos twice, it would have to be Alex Gaskarthand Mark Hoppus. Go figure that when they combined creative forces under Simple Creatures, they came up with the most unsettling music video of all time. “Thanks, I Hate It” lives up to its name, featuring informercial clips with their faces superimposed. We’d say it was something we never knew we needed, but honestly, we’re still trying to decide if we’re better or worse for it.

What are some of your favorite ridiculous alternative music videos? Let us know in the comments below!

The post 10 of the most ridiculous alternative music videos the scene has to offer appeared first on Alternative Press.

Before They Were Tatted: 10 Rockers Before + After Their Tattoos

Halsey just announced she is pregnant—see the first photos

Fear? Answering These 7 Questions Will Help You Take the Big...

6 Reasons Why Podcast Guesting Is An Untapped Marketing Tool

Machine Gun Kelly: Yungblud + I Are Like Elton John +...

Does Machine Gun Kelly make an MCR reference in this new...

21 Years Ago: 3 Doors Down Breakout With ‘The Better Life’