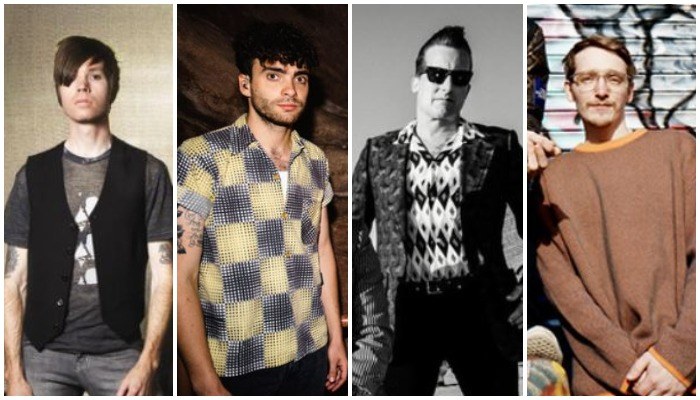 While some bands have miraculously played for decades without a lineup change, most have had to replace a member or two throughout their tenure.

We see it all the time, though it’s not always as staggering as, say, Matt Skiba stepping into a Tom DeLonge-shaped void. Often, it marks a natural progression for people who had already been involved with the outfit in some capacity.

Read more: Dave Grohl wants a Them Crooked Vultures reunion as much as you do

Here are 10 artists who contributed to their bands before officially joining them.

Dallon Weekes (Panic! At The Disco)

Before Dallon Weekes was making indie-pop waves with iDKHOW, he’d spent part of the 2010s as a full-time member of Panic! At The Disco. Prior to officially taking over for Jon Walker in a medley of different roles, however, he’d served as a touring musician behind Brendon Urie and Spencer Smith. He became an official member in 2010, contributing to Too Weird To Live, Too Rare To Die! before reverting back to a touring member in 2015 and departing in 2017.

At this point, it’s nearly impossible to imagine Paramore without Taylor York. Believe it or not, though, the legendary guitarist didn’t officially join the band until the Brand New Eyes era. But don’t think that makes him anything less than foundational. York actually co-wrote with Hayley Williams on her first song with the band, “O Star.” He’s also credited as a composer on “Conspiracy.”

Vocalist Marshal Dutton notably stepped into Hinder in 2015—nearly 15 years after their inception. But did you know that he’d been contributing to the outfit since 2010? Dutton co-produced the two albums preceding his addition, 2010’s All American Nightmare and 2012’s Welcome To The Freakshow. He also provided backing guitar, percussion, keyboards and vocals on the former.

Read more: 10 bands that ultimately morphed into the ones we know today

Would you believe that Tré Cool was ever anything less than a Green Day staple? Yeah, we were shocked, too. As it turns out, though, the iconic drummer had originally been hired on as a temporary fill-in following their debut. At the time, he’d also been playing in a punk band called the Lookouts. By the time they released their sophomore studio album, Kerplunk!, though, he’d become a permanent fixture.

The Ataris have had enough guitarists to fill out two full bands and then some. That said, John Collura had the longest run by a mile, spanning most of the 2000s. Prior to stepping in to replace Marco Peña, however, Collura had spent considerable time with the band as a guitar tech.

Was anyone surprised when Seb Barlow formally joined Neck Deep last year? We can’t imagine so. The brother of vocalist Ben Barlow, the now-bassist had been involved with the group ever since he put the founding members in contact. He’s worn a number of hats over the years but notably produced their 2013 EP, A History Of Bad Decisions. He also holds writing and production credits for their debut album, Wishful Thinking, on top of providing guest vocals.

Todd Morse only officially joined the Offspring lineup as their bassist in 2019. But did you realize that he’d been touring with them as a guitarist for a decade before that? His contributions weren’t limited to the stage, though. The multi-instrumentalist is also credited as a backing vocalist on the band’s 2012 record, Days Go By.

If you haven’t gotten the idea by now, joining a band as a touring musician seems to be a gateway for success. Rob Felicetti further demonstrated the trend when he signed on with Bowling For Soup to replace Erik Chandler as their permanent bassist in 2019. The long-standing Patent Pending guitarist had been providing a variety of stage roles for BFS since the year prior.

Jade Puget gets well-deserved credit for transforming AFI when he joined in 1998. However, while Sing The Sorrow debuted his writing and production with the band, it wasn’t his first contribution. The iconic guitarist had actually provided backing vocals on two of their early albums, Shut Your Mouth And Open Your Eyes and Very Proud Of Ya.

Read more: 10 lyrics from the 2000s that you definitely used for a Facebook status

Seasoned Fall Out Boy member Andy Hurley may have only joined the band prior to Take This To Your Grave, but his history with the outfit goes back even further. The drummer had previously performed with Wentz under their hardcore outfit Racetraitor in the ’90s. However, in the early 2000s, he’d gone on to join another band, Project Rocket. The pop-punk act actually collaborated with Fall Out Boy on a split EP in 2002, prior to Hurley’s entry into the band.

Which artists do you know of who contributed to their bands before officially joining? Let us know in the comments below!

The post 10 musicians who contributed to a band before officially joining appeared first on Alternative Press.

Queen Find Early Gig Footage, Don’t Know What to Do With...

China Could Use Bitcoin as 'Financial Weapon' Against U.S., Peter Thiel...

If You Do Business, Do BIG Business!

Here’s how Every Time I Die are revisiting past sounds on...

10 punk guitarists who took a unique approach to the genre...

Genesis Concert Film From 1973 Surfaces on YouTube in Stunning 4K...

System of a Down's 'Toxicity': 10 Facts Only Superfans Would Know