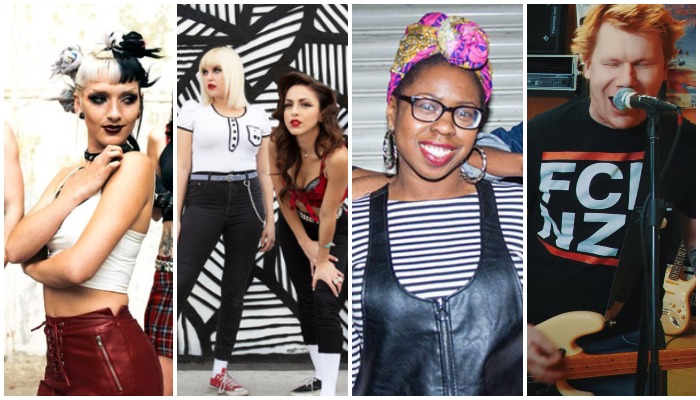 Despite what some TikTok troll in his aunt’s basement is incoherently ranting about in 2021, punk rock isn’t dead by any means. It never has been, and a sea of incredible bands in its aggressive world get overlooked all too often. We’re here to remedy this. Whether you’re a punk-rock purist who thinks that Sex Pistols or the Clash started punk rock in the U.K. in the late ’70s or a team cool guy NYC with Ramones or Talking Heads, you can agree that these 10 fantastic bands are flying the first-wave punk-rock flag higher than most.

Read more: 10 next-gen pop-punk bands who will transport you back to the 2000s

Let’s start this off with some high-quality anger. Germany’s Angry Youth Elite personify punk rock and its raucous, spirited community with every single word of their band name. Formed just three years ago, the socially conscious band echo both the ’70s and the now with each lightning-fast guitar downstroke. But it’s not just for then and 2021. It’s for every time between, with strong influences from Black Flag (’80s) and the Bouncing Souls (’90s) as well.

From the first hit of the drums to the almost immediate gritty yet catchy vocal harmonies, the Anti-Queens are a band that should head to the top of your list of acts to see live when the world opens back up. Toronto has a sea of other underrated aggressive acts, but few deserve gold, silver and bronze punk-rock medals like the Anti-Queens. Check out all 11 tracks on their self-titled album in the meantime and wait impatiently for its sequel.

Although the band’s name may sound like a character who was edited out of Pee-wee’s Big Adventure, their music is far from goofy in the best way ever. Big Joanie label themselves as “Black Feminist Sistah Punk,” and we support a global movement of bands with said description. It’s been a minute since your last LP, Big Joanie, and we can’t wait for more albums. London calling, indeed. Fans of Velvet Underground, Richard Hell and CBGB art-rock acts will freak out about Big Joanie.

Fat Wreck Chords truly knows us. Formed in 2007, crazily making the San Diego-based band one of the senior acts on this list, the Bombpops owe as much to the first wave of punk rock as they do to newer bands such as Chixdiggit! and Teen Idols. We’re not mad at this melodic resurgence and still affirm that Death In Venice Beach was one of the best punk-rock albums of 2020.

Speaking of a catchy degree of uber-longevity, the parents (and married couple rockers) known as the Dollyrots have been perfecting their bubblegum sugary aggression blend for 21 years. Hail, hail, hail. If you delve into the band’s epicly impressive catalog, which includes a series of LPs (including a live record and a Christmas-themed release), EPs and several sterling singles, prepare to become a superfan shortly after. Do this band ever stop writing songs? We’re not complaining.

San Antonio bands don’t get enough public love. We said it. However, things are changing for the better with acts such as Fea leading the charge. Part riot grrrl and completely punk rock as fuck, their 2019 LP, No Novelties, is spot on with its title and rocks quite hard for 10 tracks, the longest clocking in at three minutes and 18 seconds. Like pea without the “P” or flea without the “L,” Fea’s material is short, not so sweet and will leave a delicious bite on your musical repertoire.

The name Hands Off Gretel conjures a violent image of protection in a world of violence, and their music echoes that ethos and spirit to new heights. In a way, Hands Off Gretel sound like an angry rock ’n’ roll baby living on the streets with three parents: the 1970s, Pixies and Hole. Not a bad place to be. Check out their 2019 full-length, I Want The World, and its mini-sequel of sorts, The Angry EP, if you want proof.

While Maid Of Ace’s band name either intentionally or unintentionally conjures crazy Motörhead vibes, the four sisters seem to be fine just rocking the fuck out in the name of tragedy. Imagine a grittier Damone and a lot of beer, and you will find Maid Of Ace. Their 2020 full-length, Live Fast Or Die, is an unrelenting punk-rock masterpiece filled with youthful exuberance and enough one-two punches to knock their listeners out time and time again.

How can one create a modern act list nodding to the first wave of punk rock and not include the Ramonas? Spoiler alert: You simply can’t and shouldn’t. A tribute band that also write their own songs? Amazing. The band’s newest 2021 single “From Belgium With Love” sounds like a happy mix between harmonica-laden cavern club era the Beatles and (obviously) Ramones. Don’t sleep on the song’s extremely impressive guitar and bass solo section.

Let’s close this out with (by far) the most punk-rock band name listed here: The Venomous Pinks. The power trio do Phoenix’s lush music scene proud on their 2020 EP, I Want You. Joan Jett should be also proud as well. Hell, as her legacy lives on in a colorful full blast and a gnarly scarring bite with the Venomous Pinks. Get excited: The band are releasing a new live EP April 23.

The post 10 modern punk bands who are channeling acts from the first wave appeared first on Alternative Press.

WhoHeem’s ‘Lets Link’ Debuts on the RS 100 After Exploding on...

10 musicians who are shaping the underground scene on SoundCloud

They promote the reactivation of SMEs in San Luis Potosí

‘Demi Lovato: Dancing With the Devil’: Everything We Learned in Explosive...