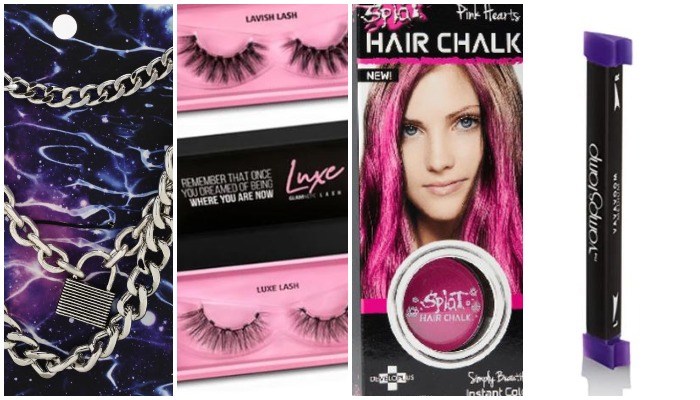 Modern edgy teens just don’t know how good they have it. Between the advancement of beauty items and the meteoric rise of online shopping, a whole new world of alternative aesthetic items is at their fingertips.

Those of us who had our scene phases in the 2000s weren’t quite as fortunate. If we couldn’t achieve the look by visiting Hot Topic or Walmart, it just wasn’t going to happen.

Here are 10 modern aesthetic items we wish were available to us during our scene years.

Hair chalk has been available to some degree for a while now. However, it only became popularized and widely accessible over the last few years. Back in the day, we had to stock up on colored hairspray from Spirit Halloween to achieve a similar, albeit temporary, effect. You can try out the less sticky alternative via Splat Hair Color ($7.99).

Long gone are the days when we had to stir extra Manic Panic into our conditioner to revive our dye jobs. Now we can skip the extra step and buy a color-saturated conditioner that doesn’t wreak havoc on our locks. It’s also a great way to experiment with different colors without long-term commitment or bleaching. We recommend trying out oVertone for all of your color conditioning needs ($32).

OK, this seems to be a bit of a hair list so far. But we challenge you to come up with a more critical aspect of the scene aesthetic. Fortunately for teens (and adults) currently in an edgy phase, there’s no need to commit themselves to a bold style whenever they feel like a change. With an abundance of high-quality wig shops, you can try on a new cut and color for less than you’d spend at the salon. If you’re in the market for an alternative wig, check out UniWigs (starting at $64.99).

Goodbye forever, spider lashes. Sure, we all got a good arm workout by brushing on mascara for 30 minutes, but was the clumpy look ever worth it? No. Magnetic lashes are so much easier to use and apply. And unlike the glue-based varieties you might’ve found at the drug store, they’re totally reusable. You can pick out a variety of different styles at Glamnetic (starting at $27.99).

Once upon a time, we had to settle for low-quality press-ons from Target. Never again. Thanks to the internet, finding long-lasting false nails that suit our personal style is easier than ever. Besides different shapes and colors, there is also a wide assortment of different designs to maximize self-expression. Rave Nailz is our go-to (starting at $25).

Honestly, we’re just the slightest bit salty about this one. In the old days, if you wanted to wear a padlock, you had to snag an ugly one from Home Depot. That’s not a problem anymore now that retailers are incorporating them into their designs. Now we’ve just got to make the push for safety-pin statement pieces. You can get the necklace shown above from Hot Topic for $9.90.

Our phones are as much a part of us as our heads at this point, so it stands to reason that we should express ourselves through them. While we used to rely on stickers and charms (oh, the 2000s…), it’s now much easier to dress up our gadgets in cool ways. You can bet that if custom cases were more accessible during the scene heyday, we’d all have been walking around with phones and iPods adorned in lyrics. Design yours now via Custom Envy ($23.99)

What doesn’t kill you makes you stronger. That mantra definitely applied to those of us who spent hours in front of the mirror, perfecting our wings. As it would turn out, though, it was all for naught. Now, with the right tool, you can achieve flawless eyeliner looks with even the shakiest of hands. We stand by the Vamp Stamp ($25).

Perfection isn’t limited to eyeliner anymore, either. Want to adorn your face with hearts, stars and more? There are stickers and stamps for that. And we’re not talking about ones that might aggravate your skin, either (looking at you, Sharpies). These products are intended and safe for cosmetic use. You can get the heart stamp from ColourPop for $8.

Read more: These 10 iPhone home screens will make you miss Myspace all over again

Can you imagine how much we would have lost our minds if My Chemical Romance dropped their eyeshadow palette in 2008? We all would have been walking around looking like store-brand versions of Gerard Way. While it would’ve been nice to have it earlier, we appreciate that they waited until YouTube tutorials were advanced enough to guide us through appropriate use.

Which aesthetic items do you wish you owned during your scene phase? Let us know in the comments!

The post 10 alternative accessories you’ll wish you had in the 2000s appeared first on Alternative Press.

Disturbed Cover Sting's 'If I Ever Lose My Faith in You'

Bright Eyes Take on Vic Chestnutt’s Heart-Wrenching ‘Flirted With You All...